The Van Veen Nursery and the Van Veen family have been synonymous with rhododendrons not just in Portland, Oregon, but nationally and around the world, for almost a century.  As Kathy Van Veen told the story, her Dutch grandfather Theodore Van Veen, Sr. started the nursey in 1926 on the 4.5 acre  plot of land in southeast Portland where it remains to this day.  Before long, the Bonneville Power people came, offering cheap electric power from the new Bonneville dam.  Kathy’s grandfather took them up on it, laying electric heating cable under his plant propagation beds to promote root formation on the cuttings he planted and grew into wholesale nursery stock.

Kathy’s father, Ted Van Veen, and then Kathy herself eventually took over the nursery. At its peak, they produced hundreds of thousands of rhododendrons rooted from cuttings, which were distributed not just in Portland and the Northwest, but to almost every corner of the world.  Both Ted and Kathy were heavily involved throughout their lives in the landmark Crystal Springs Rhododendron Garden, a Portland city treasure, and in the national American Rhododendron Society and its Portland chapter.

But they didn’t just propagate large numbers of rhododendrons, they also provided custom propagating services to individual hybridizers, growers, and local gardeners. A professional or amateur hybridizer might place pollen on a flower to form seeds, painstakingly grow those seeds into plants, and then wait years for them to bloom to see if one of them was something new, unique, and worthwhile.  If so, multiple cuttings could be taken and sent to Kathy Van Veen to be rooted and a single new unique hybrid could be multiplied for gardeners everywhere. Or a neighborhood gardener with a favorite rhododendron could take a few cuttings to Kathy and she would root them for a more than reasonable price, so that a favorite plant could be shared with friends and family.

IN 2016, Kathy Van Veen, the third and last generation in this world-famous nursery family, was diagnosed with what ultimately was an incurable illness.  She consulted with her friends and colleagues in the Portland Chapter of the American Rhododendron Society, seeking to find a way to preserve her family’s heritage and legacy.  Ultimately, when Kathy passed away in 2017, she bequeathed the nursery to a new charitable entity created to receive it, which became the Van Veen Heritage Garden.  Along with it, she bequeathed a limited amount of money to try to assist in getting it off the ground.

One of Kathy’s goals was to preserve and protect the nursery property from residential or commercial development.  To that end, the property was bequeathed subject to a conservation easement. A second goal was to try and maintain the family heritage of rhododendron propagation by demonstrating and teaching propagation from cuttings in a working setting inside the city.  She envisioned classes, school field trips, internships and similar programs and activities. Located in the heart of the city, both school children and adult visitors could be exposed there to agricultural and nursery processes, using plant propagation as the example.  The stages of plant development from bare cuttings to yearling plants and then to full sized rhododendrons could all be seen alongside each other in the various greenhouses.

Members of the American Rhododendron Society, including retired professionals from the nursery industry, serve as volunteer overseers of the nursery and garden restoration projects. Many of them are internationally recognized speakers and have served other non- profit botanical gardens, including the Rhododendron Species Botanical Garden in the state of Washington.

The Van Veen Heritage Garden faced significant challenges from the outset.  Kathy passed away  in April of 2017.  As a result of probate proceedings, her bequest was not released to VVHG until  approximately 17months later.  In that interval, a significant part of Kathy’s financial bequest had already been used simply to maintain the property and plants prior to VVHG taking possession of the bequest and undertaking any significant projects.

The greenhouses and propagation tables required major renovation, rebuilding, and repair. Overhead was significant, with knowledgeable employees to retain and the costs such as water, power, growing medium, and fertilizer. 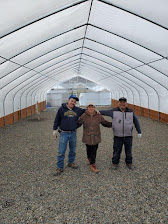 Much progress has been made since late 2018.   Several greenhouses had to be torn down.  Two new greenhouses outfitted with modern watering systems and temperature controls were built.

But much remains to be done, which will require the raising of significant additional sums of money.

Van Veen Heritage Garden’s goal is not to simply create another beautiful garden for visitors.  The unrivaled Crystal Springs Rhododendron Garden was beloved by the Van Veen family and is  located nearby. Instead, the goal is to provide a space for some specific educational and learning experiences, using the family heritage of three generations of the craft of plant propagation as the setting and the method.

One of the glories of gardening is the way it can combine cutting edge science with lore and craftmanship learned and passed on through generations of trial and experience.  We see the Van Veen Heritage Garden as a unique setting and a unique way to demonstrate that to the public in general and to schoolchildren in particular. 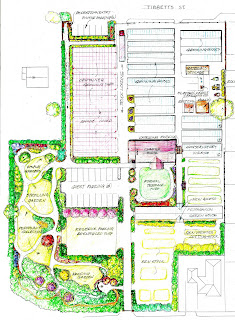 We are working toward offering the general public the opportunity to come see how plants are actually propagated and to see where so many of the rhododendrons at Crystal Springs Rhododendron Garden began their life as cuttings.    That is a rare experience in the modern world of “smart” devices, applications, and programs whose inner workings are unknown and invisible to many or most. We envision Van Veen Heritage Garden as a companion and complement to CSRG and other prominent Portland gardens.

We recognize that to be viable long term, the property must indeed be attractive. We have envisioned a space that the public will want to visit and spend time in. Significant plant and landscape work will be required, because the property, layout and plantings were designed to serve a working propagation nursery rather than for public viewing.

Nonetheless, the rhododendron collection, acquired over almost a century by the Van Veen family, are significant and beautiful in themselves.

There are also other plantings of significant public interest, such as landmark crepe myrtles, which Kathy herself placed on the registry of historic heritage trees for their protection. 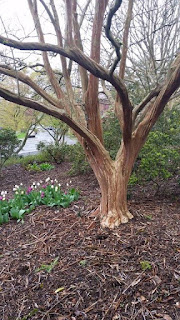 In addition, the Van Veen Heritage Garden has recently accepted under our care and ownership, the Bovee Nursery’s extensive collection of vireya rhododendrons. These are tropical rhododendrons that require special greenhouse conditions.

We have refurbished a greenhouse to display those plants, which bloom spectacularly and have recently inspired much public interest. We are already successfully propagating vireya rhododendrons and will be able to make them available to the public. 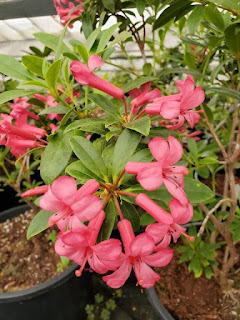 Despite progress, additional unforeseen challenges have also arisen.  The advent of Covid 19 has generally interfered with our ability to gather volunteers on the property and to invite the public (and potential donors) in to see what we are doing.  More specifically, the 75th Anniversary of the founding in Portland of the American Rhododendron Society in was to be celebrated with an ARS Convention here that was scheduled for April of 2020. National and International experts and speakers, and rhododendron enthusiasts from all over the world, were scheduled to attend.  At the last minute that event was postponed.  It has subsequently been rescheduled for April of 2022, so that opportunity, although not lost, has been delayed for two years.  In any case, we have to assume that Covid 19 will probably be a continuing obstacle for the foreseeable future.

For all of these reasons, we have reached the point at which we need to solicit additional funds to reach our goals and to sustain our educational programs into the future.

Gustav Mahler once pointed out that:

“ TRADITION IS NOT THE WORSHIP OF ASHES, BUT THE PRSERVATION OF FIRE.”

We hope that you are able and willing to help us preserve the tradition and heritage of three generations of the Van Veen family for the benefit of generations to come.